No Widgets found in the Sidebar Alt!

The journey goes back a long way in my family from the Celtic Ancestry of Scotland and Wales to more Recent times here in London England. In the 1950`s my grandfather and mother became quite well known with mind reading, escapology, illusionism, clairvoyance, palmistry and working with celebrities at BBC TV and Radio.

Not surprisingly, I have always been interested in healing and mysticism from a very early age. At around the age of three years old I remember refusing to be pulled away from my grandmother, when I wanted to listen to the Salvation Army in the market square. At home, my grandfather would give me healing or quite often find an alternative remedy whenever I fell or cut myself. I was never taken to a hospital with an injury. My grandfather always used to tell me that he was a healer and my mother believed she was able to heal! I also developed psychic awareness, as he would test me with playing and psychic cards and I had very strong dreams of premonitions.

I suppose I really became interested in spiritual healing when I first attended a church school at around five years old. I was fascinated by the stories of the Bible when hearing about Jesus healing the sick and how he then showed his disciples how to heal others. As a child I believed that everything was possible. I could never understand why, for example whenever I tried to move an object across the room with pure thought it did not move, alternatively maybe, sometimes it did. I could certainly make a glass move when turning it upside down on a table by placing one or two fingers lightly on the top of it.

As time passed by, disruptions occurred within the family and I gradually became slightly disillusioned and lost faith in magic, people and the world. I was also being taught that it was only my imagination. How right they were, without realizing what they were actually saying, because it is through our thoughts and imagination that everything is created, negative and positive. It is only fear that holds us back, and that fear is ourselves. It took a long time to realize that “all things are possible”.

As far back as I can remember, I suppose I have always been quite a spiritual person, believing in a Universal life force energy which some of us may choose to call God? Although there were many times when I strayed from the path somehow, I always found myself being guided back again after losing my way, each time becoming stronger within myself, after every lesson it had taught me.

These are the cosmic universal laws of cause and effect. It is the karmic flow which repeats until we learn the lesson given. Even though I had taken a great interest in healing and spirituality, I became a musician, travelled the world and learned a little in a roundabout way. At the time I did not really understand how to channel this so called universal energy and to be able to pass it on to others.

Some years later, I decided to take a Reiki Healing course. It was as if the heavens had opened up to me and even though it was subtle at first it slowly began to fill my whole body and mind with radiant energy, becoming stronger every time I practiced Reiki. Eventually, a tingling sensation would occur in my hands every time I spoke of healing, whilst at the same time, becoming like a hollow tube when giving healing as the energy passed through to the person receiving the healing. It also gave me a greater understanding of life and a new direction.

It all fell into shape; not only did I become aware of the energy that was being channelled through my hands when I was giving healing, but also this created a powerful effect. I found that I was often able to sense certain areas of the recipient’s body detecting heat or cold. These areas may be related to previous causes of discomfort, disease or blockages within the client, that stop the free flow of energy. I finally realized that it was possible for anyone to receive or learn to heal, and to develop their awareness through Reiki Healing.

In three stages and over a period of time taking Usui Reiki levels 1, 2 and 3, I became a Reiki Master and a teacher of Reiki. Since that time: I have taken Levels 1, 2 & 3 Master Teacher degrees of Karuna Reiki. 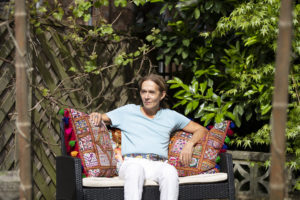